ULI Michigan is pleased to announce that the recipient of the 2023 Lifetime Achievement Award will be Susan T. Mosey, Executive Director of Midtown Detroit, Inc. Mosey will be recognized as the first female to receive the prestigious award at the ULI Lifetime Achievement Award Dinner set for Wednesday, May 3, 2022 at the Fisher Building in the heart of Detroit’s New Center.

The Lifetime Achievement Award was established to recognize leaders in the Michigan real estate community whose achievements throughout their lifetime – including contributions to real estate, civic, charitable and philanthropic endeavors – exemplify the spirit and mission of ULI. In addition, the Lifetime Achievement Award Dinner serves as ULI Michigan’s annual fundraiser, and supports the many programs and initiatives coordinated by the District Council.

Mosey has been a member of ULI Michigan since 2006 and has been awarded the ULI Global Award for Excellence (2013) and the ULI/UM Real Estate Forum – Michigan Real Estate Excellence Award for Midtown Green Alleys (2015). She has also been recognized with over two dozen awards during her 35+ year career. Most recently, Mosey was named Crain’s 100 Most Influential Women (2021) and has been a recipient of the following awards – Michigan Green Industry Association – Chairman’s Award (2021), The Whitney Legacy Award (2021), Corenet Global – Community Real Estate Executive of the Year (2018), Governor’s Award for Historic Preservation (2017), ACC Economic Development Award (2017), and The Best in Mich Business – One Person Wonder Award (2016). 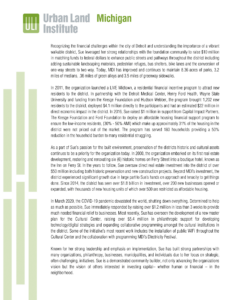 Would you like to sponsor the ULI Michigan Lifetime Achievement Dinner? There are several sponsorship options available. 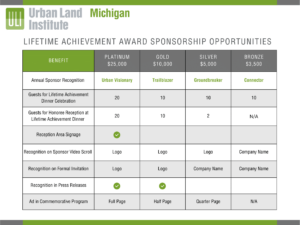 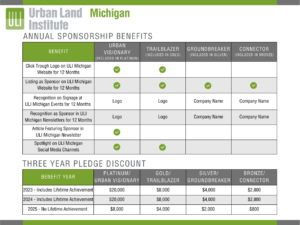